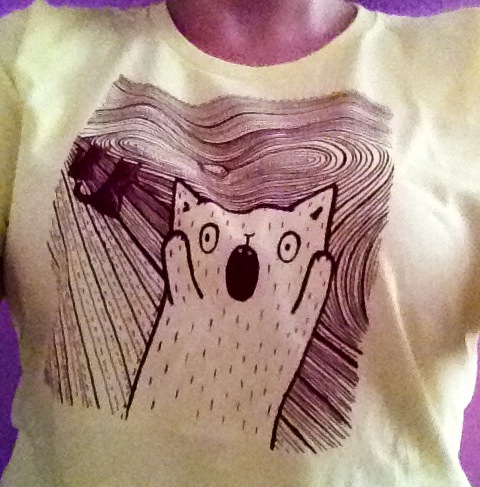 Another Tuesday, another adorable tee.  Yes, I know Edvard Munch’s The Scream is pretty played out in terms of pop culture, but I admit that I have  always been a fan of Expressionist art and this just happens to have a cat in it!  I love the little cheeseburger floating in the sky, as if this kitty is having an existential crisis because he cannot haz a cheezburger.   This particular tee is still available (at the time of this posting) from Woot! Shirt so get you one while you still can!  Until next time, haz you a cheezburger and keep wearing tees! 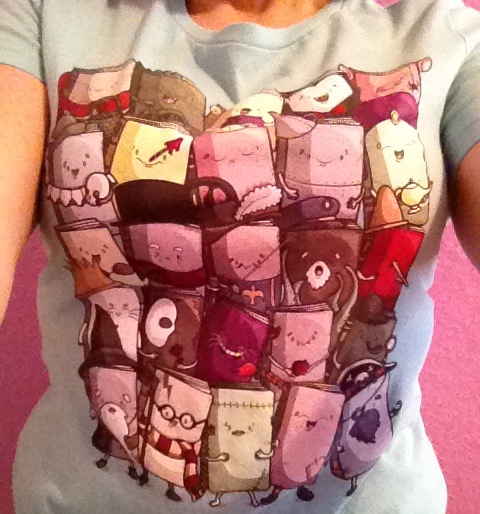 Happy Tuesday!  As summer is winding to a close, I thought about how I used to spend summers as a child.  Back then, the days were filled with swimming and the afternoons when it rained (as it often did in Southern Louisiana in the summer) involved reading.  This week’s sartorial shout-out, Storytellers hearkens back to those days when sleeping late was the norm, PB&Jelly was a main component of my diet, and books were my own secret world.  At least books are a constant as an adult.  Take a look and see if you can name all the books referenced on this tee.  Here’s a better view.

Storytellers is currently sold out on Threadless, but they often reprint tees and not surprisingly, this is a popular one so keep checking back if you want one for your very own.  They do still have kids & infant sizes available and I think it would be awesome for any kid.

So sometimes when life as an adult gets a little overwhelming, pick up a book and escape.  You’ll be glad you did.  Until next time, have a lemonade, read a book & keep wearing tees!

I think my head just exploded when I happened upon SceeneShoes Etsy shop.   I’ve never been one for outrageous lingerie, but I think I just found something I need!  And I must admit it would be a wonderful companion to my shoes!

The WonderWoman bra is just one of many wonderfully nerdy custom painted undergarments and shoes the artist has available – including R2D2 and The Teenage Mutant Ninja Turtles!  Now, I wonder if she’ll do a custom Slave Girl Leia version . . .

Oh The Three Amigos, how I love thee and this week’s tee is a perfect nod to that film.  I picked this one up in a trade at Teetrade.org, a wonderful site that makes it easy for you to trade a tee that was bought on a whim after a few too many (drinks or hours of gaming) for something you might actually wear.

Though this particular tee is no longer available on Shirt.Woot!, this one is currently available on Threadless!  Although it doesn’t reference The Three Amigos, it sure made me laugh.  I kind of think of it as 50 Shades of Pinata.

Speaking of NSFW pinatas, take a gander at the newest episode of De-Pixelated from Blue Goggles Films!

Wow!  Who knew pinatas were such a thing?  Maybe they’re the new mustache.  Until next time – Viva le Tee!

T-Shirt Tuesday #13: We’ve Got Some Work To Do Now

Is it Tuesday again, already?  Seriously, I feel like the weeks fly by.  This week’s sartorial shout-out is one of my favorites – OK well they all are to some extent. So for lucky #13, I bring you from Threadless “We’ve Got Some Work to Do Now” by Travis Pitts.

Not only do I love the title, (although it reminds me that I have been quite remiss on giving folks my two cents about this summer’s movies) the art is so, so awesome!

I’ve been a fan of Scooby Doo, Where Are You? for as long as I remember.  This was the original series that ran even before I was born, but was repeated often during the late seventies and very early eighties.  I think this show for my early love of supernatural storytelling.  In any case, being a nerdy child, I always liked Velma though I always wished she would dress a little better and do something with her hair.  I mean she didn’t have to be prissy like Daphne, but surely she could do something a bit more than that helmet hairdo.  Thus, when I saw this shirt it made me really happy.  Not only was my girl Velma the brains of the operation, but she was also a zombie killing badass.  One of my favorite touches is Daphne’s green scarf tied to Velma’s arm.  That and the “R.I.P. S+F+D” on the side of the Misery Machine just take it to the next level.

Though it is currently out of stock at Threadless, they often do reprints, so if you want one of your own, keep checking back.  It’s a totally badass shirt for Scooby Doo and zombie fans alike.  Needless to say, I think this shirt will be the inspiration for my 2012 Halloween costume.  Until next time, have some scooby snacks and keep wearing tees!

As I rifled through my T-shirt collection to find something fitting for this week’s post, I realized that I had nothing that was red, white & blue – not even a lone Captain America shirt in the mix.  So I decided to think out of the box a bit.  And so you have this week’s T-Shirt Tuesday featured tee. It’s from a little place called The Salt Lick, and to me, BBQ means the 4th of July.

Now, BBQ is a serious, serious thing in Texas and this post does not come down on any side of what central Texas BBQ purveyor is the best.  I’ve had BBQ from quite a few and all have their virtues – I simply have a Salt Lick tee.  If I had another BBQ themed tee, I may have featured it.  In any case, Happy 4th of July.  Eat some BBQ, drink some cold (locally made or even better, homebrewed beer) and be free to wear a tee.

It has already been one of those weeks and its only Tuesday so I felt it was fitting to feature a tee from one of my favorite Austin area craft breweries – Jester King.  This is not so much an entry about the tee (which is just fine), but about the brewery (and brews).  I discovered Jester King a few years ago with the release of their humorously named Commercial Suicide.  While I didn’t love that particular brew, what I did like was their approach to brewing.  Their first few beers (aside from Commercial Suicide) were serviceable, but it wasn’t until their shift to brewing farmhouse style beers that I really became a fan.

Add to that, leading the charge against the Texas Alcoholic Beverage Commission’s ridiculous and antiquated laws, and I am a lifetime fan of Jester King.  Oh, and I didn’t even mention that they are the first (and for the time only) certified organic brewery in the state of Texas!  Well guess I just did!  So much awesomeness and tasty brews – if you can get your hands on some Jester King, definitely give it a try!

So I raise my glass and give this week’s sartorial shout out to Jester King Craft Brewery!  Cue the metal, rock on & wear tees!

Who would win in this epic battle?  As a Tesla fan (the man, not the band) I would have to come down on his side, though I have had a number of conversations with folks believing Edison would have the upperhand.  In any case, this T-Shirt Tuesday featured tee is a fun one from Think Geek.  It brings together my nerdy science love and my passion for fighting games.   In fact,  the friend who gave it to me for my birthday said that he saw it and thought of me.  This is not surprising since I do have an art print of Tesla hanging in my dining room.

If you love yourself some Tesla (or Edison, I suppose) get your own Tesla vs. Edison tee and imagine what the game would actually be like with a special move involving Tesla’s  earthquake machine.  Actually, somebody should get on that like now.  I, for one, would LOVE a coin-op type fighting game with various scientists and philosophers as characters.  But then again, that’s just me.  Until next Tuesday,  keep cool (it’s been hot here in TX) and wear tees!

Dispatches from Cinematopia: And So Begins the Summer of My Discontent – Men In Black III and Prometheus

As I had mentioned before, I was cautiously optimistic about Summer 2012 films.  Sure, I loved The Avengers.  Maybe that lulled me into believing that this would be a completely kick-ass summer for movies.  Then I saw Men In Black III and Prometheus.  You hear that sound?  That’s me, banging my head on my desk.

Now I should have stuck to my initial assumptions about Men In Black III.  That is was going to be 1) As craptacular as MIB II, 2) A movie that didn’t need to be made, and 3) Horrible based on the trailer.  Even though I had these assumptions, the film got some decent reviews and somewhere in the dark, jaded film-goer’s heart of mine, I hoped that it would be as good as the first Men in Black.  Let me return a minute to MIB II, a film that was so bad that it diminished my enjoyment of the original.  How many films manage to that?  This one did.  It’s almost as if I was a little embarrassed to even enjoy the first film after laying eyes on the disastrous sequel.  So, here along comes part 3.   I won’t belabor the plot points since it has been out for quite some time, but it was pretty lame.  Biggest issues:

I didn’t walk out of Men In Black III angry.  Just a bit disappointed, though I should have just trusted my instincts.  Now Prometheus . . .

Oh what can I say, aside from, “WHY?!?”  I know.  I shouldn’t have had such high expectations.  I should have learned my lesson by now.  But I love Alien so much and the trailers for Prometheus looked so cool.  And Michael Fassbender.  And Noomi Rapace!  Alas,  none of it mattered.  Prometheus felt incomplete and ill thought out in terms of story and plot.  I won’t even go into all of my issues.  It makes me too depressed.  I really, really wanted to like this movie, but instead I felt a bit punk’d.  So much pseudo-coolness but for what?  Characters that behave ridiculously?  A story that is at best meh and at worst incoherent?  Viral marketing videos that were far, far better than the film itself?  Sigh.

Well, at least there are still some other films that I am looking forward to this summer (I’m looking at you, Dark Knight Rises).  I’m going to dial down my expectations, but all I have to say now is – Moonrise Kingdom, you better not let me down!

Posted in Dispatches from Cinematopia, Movies

I have been terribly remiss at writing posts other than T-Shirt Tuesdays these last few weeks as I have had a number of house guests  which has drawn my attention.  Fear not, I will be back with reviews and/or discussions of Men in Black III (sigh) and Prometheus (double sigh).  Today’s featured tee is one I picked up from Threadless and is somewhat still available.

Of course, the inclusion of a robot on a tee pretty much makes it an instabuy, but this one also has a kickass girl on it and a reference to lesser known DC characters, Star Spangled Kid and her sidekick S.T.R.I.P.E which makes it mighty.  That’s it for this week’s sartorial shout-out.  I promise this will be more than just a shirt a week blog, but until my next post, keep cool (it’s hot here in Austin) and keep wearing tees!